September 5, 2016 by admin in Uncategorized 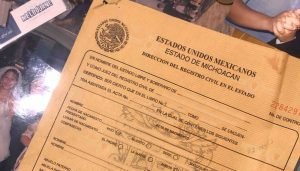 Do you remember the story of a premature boy born under the stars? The miracle baby called Cesar Omar? Well, this is how I met him.

Three years after leaving us to chase the American dream, my dad returned home one night out of the blue. We had barely managed to survive without him, but it turns out that so had he.

Three years had been a long time for someone trying to make it tooth and nail in a strange country where his dreams were shattered. We still had no idea what happened to my dad during that time away, but we would soon find out.

I have to admit I was quite excited to get my father back. With him here, I found new hope and I was distracted because I had a companion. He took me out with him, he made time for me, and he always paid attention to me. Hey let’s go downtown or let’s go to see my family… he wanted to do things with me, which is more than I can say for the rest of the lot living at nana’s house- even my mom. It doesn’t mean I was particularly happy to have him back, but his return surprised me positively.

My mom couldn’t hide her happiness to have him back, it was obvious.

But as the rest of the family it was a different story. They were absolutely not happy with AR being around. For them it wasn’t that easy to forget about the past and all the hurt he had caused before leaving. Gossiping about him became their favorite activity, so they did it every chance they got.

I kept overhearing bits of their conversations without really understanding what was going on, and without giving it the importance that it needed. Apparently AR was a jerk, a loser and good-for-nothing in everyone’s eyes. They kept repeating to my mom that she was better off without him but she made sure everyone knew she loved him and that if she was going to give him another chance no one would go against it. She thought we were going to move on with our lives, to forgive and forget the past and this was the chance to write a new chapter in our lives. Not for long.

A few months after his arrival, the whole house was sleeping when suddenly a horrible sound woke us up in the middle of the night. Shouting and loud screeches became more horrible while my mom yelled for help.

With a loud bang, my dad had fallen off the bed and started scratching at his chest like an exorcism scene.

“SPIDERS… SPIDERS… THEY ARE GONNA EAT ME” he shivered and twisted.

Everyone in the house ran into our little room confused by the ruckus.

“TAKE AWAY WHAT? THERE IS NOTHING.” My mom screamed at him trying to calm him down.

Followed by my nana’s voice “CALL AN AMBULANCE.”

No one could calm him down while he started foaming at the mouth, as if possessed by an evil spirit. It was like a long scene from a horror movie, until he stopped scratching at the invisible spiders on his naked skin.

When they got to the hospital, the doctor explained that my father was a drug addict.

Apparently, he was hooked on horse tranquilizers, which the doctor suspected he had started taking in the US. The American Dream had become his worst nightmare and with it the chance that my mother’s family were waiting for: from here on they wouldn’t shut up, and their murmurs and echoes became loud and clear. They told my mom they didn’t like him, they didn’t trust him and it was dangerous to keep him around the house.

For my poor mom who had been torn between her heart and her family, it was the drop that made the vase overflow. She had defended her love for AR, but drugs were unacceptable to her. She couldn’t defend him anymore. It was time to let him go.

So once again AR left us, sooner than everyone expected, he left my mom and he left me… and since he couldn’t afford a house of his own, he moved back with his own family and all that was left from him was a box in the coach with a pair of white Converse shoes for me. I had told him I wanted them for my birthday.

Months passed and I didn’t see him or hear from him, and I was too afraid to ask my mom about him till one day after my shift at the burger truck, l came home and I caught my mom on the phone. She sounded upset so I decided to listen in on her conversation, and I understood she was talking to my AR.

Just when it looked like she was about to hang up, my mom said “Ruben is dead and all this happening is because of you, so don’t ever call here again”.

I ran up to her as she was putting the phone down and immediately confronted her, asking her what kind of monster would tell such a lie, and saying I couldn’t believe she was keeping me away from my dad.

She punched me in the face, forcing me to calm down. Then with a very low voice she said “He is not even your father”.

I was horrified, and I felt the blood drain away from my face. What kind of monster was she? How could she tell my father that I was dead, and then tell me that he was not my father? Her cruelty had reached new depths, and I hated her with every fiber of my being.

But when the anger started leaving my body, everything started making sense. My brain was working in overdrive, trying to make sense of everything.  Pieces of conversations I had overheard, gossip from my aunts and uncles, old stories from my childhood. Something was not right and I could feel it in my gut.

My first reaction was to immediately go to the drawer where my mom saved pictures and documents. There I found my birth certificate, stating that AR was my father, Ruben’s father. But there were so many other papers, so I kept rummaging trough this treasure chest.  I found pictures I had never seen before of my siblings and me, of my mom, of my entire family. I kept looking, and then my eyes fell on a crumpled piece of paper: another birth certificate. This one was for a boy named Cesar Omar Islas Perez, which I immediately recognized as my siblings’ last name: Islas Perez.

I took that piece of old paper and I faced my sister, brother, and all the family members for an explanation, but no one would tell me anything. Seeing their reaction and the rejection for the subject I started imagining that my mom had lost a child, and that’s why my sister and brother wouldn’t open the painful subject.

The next few days I would be questioning everyone, asking them about AR, about Cesar Omar, and tons of issues until my nana finally gave in.

Cesar Omar Islas Perez was me.

AR was not my father.

My reasoning was, if AR was not my father and Cesar Omar’s last name is Islas Perez as my siblings, then I must have the same father as my brother and sister. But I knew they were in contact with their biological father so it was obvious he wasn’t.

This would become my biggest unsolved existential story the upcoming years, because just like that the man I thought was my father, wasn’t.

It was as if everything I knew was a lie, like if my identity was taken away from me.

Who was I? Who was my family? Many such questions about my life started bombarding my mind and would stay with me during my adolescence.

There is one comment on CHAPTER 9: When Ruben Meets Cesar Omar